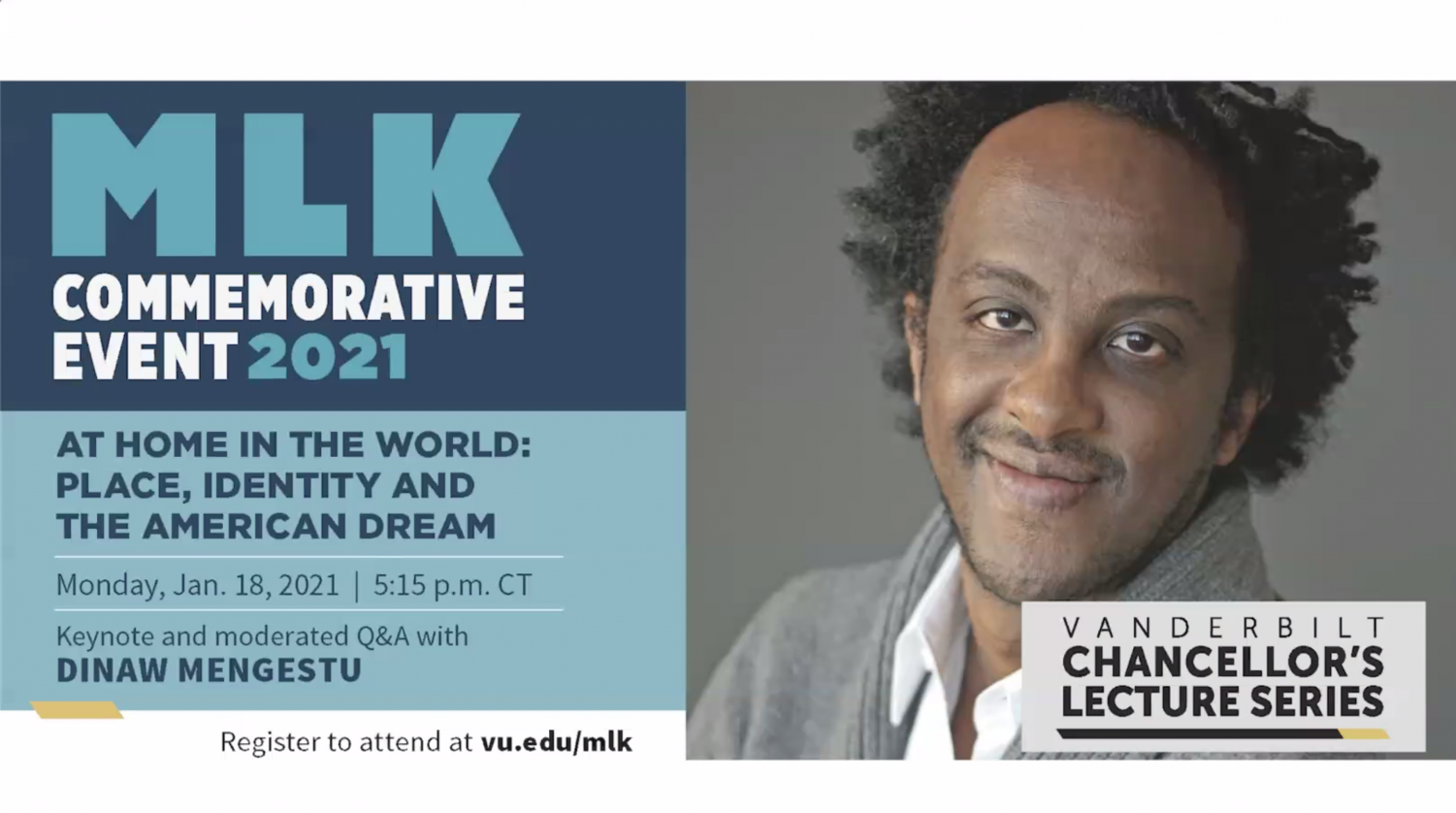 Dinaw Mengestu is a critically acclaimed Ethiopian-American novelist and author who explores issues of identity, the immigrant experience, and the American dream.  He has received numerous awards, including the MacArthur Foundation Genius Award, the National Book Foundation’s “5 Under 35” award, and The New Yorker’s “20 under 40” award.  Currently, he is a professor at Bard College.  On Monday, Mengestu spoke to the Vanderbilt community as the keynote speaker at the Martin Luther King Jr. Commemorative Virtual Event, “At Home in the World: Place, Identity and the American Dream.”

The Vanderbilt Political Review sat down with Mengestu (virtually) to get his take on American politics, the intersectional Black and immigrant experience, and the legacy of Martin Luther King Jr.

This interview has been edited for content and clarity.

Randle: Last week was especially turbulent in the US, with pro-Trump extremists storming the Capitol and the House voting to impeach President Trump on Tuesday.   What insights do you have about these events and our political climate more generally?

Mengestu: One, as people have noted, this isn’t a surprise.  What we’ve witnessed is actually just a sort of punctuation of four years… the groundwork has been laid for years for us to get to this point.

The thing I’ve been thinking about the most is: how has this been possible?  How have we created this narrative of this pro-Trump movement and of these extreme pro-Trump supporters as being somehow decent and law-abiding people?  How have they managed to get away with that law-abiding rhetoric when clearly what we’ve witnessed is the exact opposite?  It’s violence, it’s bigotry, and it’s racism.  The ability to continue to present themselves as this party of law and order, the party who believes in the Constitution and supports democracy—that’s what I’m the most fascinated by.

It’s the construction of a narrative, and it’s a narrative that has a lot of political power and weight.  It’s a narrative that exists far more on the right in its ability to assert that whatever they do is good.  I was thinking of it almost as a costume performance.  It’s a movement that has paraded itself under a banner of goodness and American virtues.  And that banner has been the very thing that has allowed them to escape criticism… and what we see now is that banner starting to fall away.  The costume party has come to an end, and we see what that movement really is.  It’s violent, selfish, and has nothing to do with law, nothing to do with the Constitution.  It has everything to do with wanting to hold on to a specific set of ideals that preserves their view of the world.

I am fascinated by that unmasking, that unveiling, of how that continues to play out, and how far the movement reverts to try to defend itself again. How do they make the move back to presenting themselves as being good, and do we accept that?  The other side of course, is the Left.  The Left and its opposition to American violence has always been castigated as being critical of America and therefore anti-American, radical, communist, and all things that are intended to project a veneer of being somehow outside the US, and outside American values.  So how those competing narratives play out over the next few years is going to be fascinating.

I wouldn’t say that I’m not hopeful.  I think anyone who gets to work with students has a great reason to be hopeful—my students have so much integrity, they have so much compassion for one another and the differences in their experiences.  When they’re talking to each other and navigating divisions in race and gender and class and economics, they take care to communicate and listen to one another.  That’s a great sense of possibility.  There’s a clear move towards a way of communicating and listening to one another that allows people’s experiences to be present without being challenged.  That possibility gives me hope.

The present moment, and the next four years, however, is something else.  We noted, when Trump was elected, that there was unmasking there.  I think we’re unmasking even further.  We’re moving into the next narrative transformation where the veneer of goodness has been stripped away and what’s left now is a sort of violent rage and sense of entitlement that a lot of people feel.  And that can’t necessarily be quieted down any more.  It has fully presented itself.  I don’t think the solution is as simple as negotiating or placating.  I think there’s a necessity for a strong and continual erasing of [violent, bigoted] voices, and say, that’s not who we are, and that’s not the direction this country is going in.  To actively work against it is necessary.

Could you talk a little bit about the intersectional experience of being Black and an immigrant in the United States right now?

Yeah.  We’ve seen the nightmare that is having this administration attack everything that is vulnerable inside this country from as many different ways as possible.  And where that comes from is this desire to shrink America down into a very small sense of itself—to reduce America into this supposedly “patriotic” version of a homogenous state and to criticize and attack anything that looks different than that.  Anything that’s a minority, or anything that’s foreign.  Being an immigrant and Black in America means that you see that the attacks on immigration come from the same racist well that the attacks on Black Lives Matter and minorities across this country come from—the desire to close the psychological borders of what this country looks like and who has the right to claim it.  I think that’s one of the ways that you can begin to see an expansion of what it means to be Black in America, continually evolving and growing into something that contains more layers.  There’s now a sort of merging of different narratives and experiences of what an African immigrant experiences and a Caribbean immigrant experiences and a biracial American experiences.  The web of understanding and definition contains and always has contained multitudes.  There’s never been a singular Black American experience.  There’s a wonderful professor at Vanderbilt who studies transformational solidarity, which I think is what we’re witnessing—the immigrant and Black communities sort of coming together in solidarity.  Not just through the experience of racism in America, but also through the hopeful and vibrant celebration of what a Black life looks like in America.  That is a part of transformational solidarity.

And finally, given that you’re our keynote speaker celebrating Martin Luther King Jr., what message do you have for our readers about his legacy and how that fits into today’s political climate?

It fits in to what we discussed earlier: in a lot of MLK’s work, like his Letter from a Birmingham Jail, he discusses being called an extremist.  That was one of the many labels attached to him.  He embraced that idea—there is something radical of America moving into a better potential.  To believe that in spite of what you’ve lived through; to believe that being in a jail cell for advocating for the basic human rights of your community, and to persist in the argument that this country will be better in the way it connects and relates to Black people…  “Hope” often sounds like an easy way out, because I think the word ignores the amount of labor it actually takes to have hope.  You can’t just “have” hope.  You have to actively create the conditions under which hope is possible, and that’s a constant labor.  And you see that with Dr. King, that constant work and energy was dedicated into creating and maintaining hope.  It’s so easy, really easy, to not do that, especially thinking about the last four years.  Why have hope?  He reminds you why.  If the generation before us can maintain hope, there’s really no reason why we can’t.