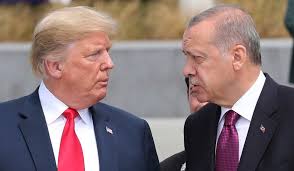 A Student’s Perspective on American-Turkish Relations

For years, members of Turkish President Recep Tayyip Erdogan’s Justice and Development Party (AKP) have pandered to the anti-Americanism espoused by its nationalistic base. Erdogan has profited politically from repeatedly undermining the United States while claiming to support a strategic partnership, but has faced few consequences for his actions.

Turkey has committed a series of escalating offenses against the U.S. in recent times. Beginning in 2016, Turkey apprehended American pastor Andrew Brunson. In July of 2019, Turkey purchased Russian S-400 missile systems designed to shoot down North Atlantic Treaty Organization (NATO) planes. For obvious reasons, NATO members were irate and there were bipartisan calls for sanctions in the United States. Finally, the most recent altercation was in October 2019 when Turkey invaded northern Syria after President Trump pulled U.S. troops from the region. Turkey had signaled many times a desire to establish a “safe-zone” by pushing the People’s Protection Units (YPG), a U.S.-backed Kurdish militant group, away from its southern border. Many perceived Trump’s spontaneous and unilateral decision to pull troops from northern Syria as a green light for Turkey to invade. After several days of turmoil, Turkey committed to a permanent ceasefire and the United States lifted sanctions as a result. Despite President Trump’s efforts to move past the incident and maintain a positive relationship with Erdogan, Turkey’s aggressive foreign policy caused outrage and a rare bipartisan rebuke from Congress.

On October 29, 2019, the House of Representatives passed a resolution officially recognizing the Armenian genocide in a 405-11 vote. The Ottoman Empire, forerunner of modern-day Turkey, forced hundreds of thousands of Christian Armenians out of eastern Anatolia and into the Syrian desert. Over a million people were killed or died from starvation and disease, yet Erdogan has maintained that the atrocity did not amount to genocide. A furious Erdogan met with President Trump and several Senate Republicans in November and returned Trump’s letter urging him not to invade Syria, in what Turkish media hailed as an act of defiance. Following the meeting, Senator Lindsey Graham (R-SC), unabashed Trump devotee, blocked the Armenian genocide resolution in the Senate in an attempt to repair Turkish-American relations at Trump’s urging. Two more Republican Senators filled Graham’s shoes in the following two votes, but realizing that the bill’s passage was inevitable, they eventually stepped aside and posed no objections in the Senate’s fourth vote on the bill. The Senate passed the resolution unanimously, a striking and symbolically important move in a time of heightened political polarization, much to Erdogan’s ire. Unsurprisingly, Erdogan called the votes “worthless” and insulting.

State Department spokeswoman Morgan Ortagus bluntly declared, “the position of the administration has not changed.” In April 2019, on the anniversary of the killings, Trump released a statement calling the event an atrocity, but not a genocide. Ortagus explained that the administration’s views are “reflected in the president’s definitive statement on this issue from last April.”  Trump is an outlier even among his party – every Senate Republican voted in favor of the bill – because of his misplaced desire to preserve a friendship with Erdogan.

Unfortunately, Turkey can no longer be regarded as a trustworthy NATO member and U.S. ally as it once was. The country’s foreign policy belligerence has rendered it unpredictable and untrustworthy. Thus far, Turkey has not proven itself an enemy, but the U.S. should no longer tolerate aggressive behavior to preserve the shell of an alliance. Passing the resolution to recognize the Armenian genocide was certainly a step in the right direction, because the U.S. is finally prioritizing its ethical values rather than ignoring history for the sake of a broken alliance.  Senator Bob Menendez (D-N.J.) emotionally stated that he is “thankful this resolution has passed at a time in which there are still survivors of the genocide” who can “see the Senate acknowledge what they went through.” Congress made the correct decision in passing the bill from both a humanitarian perspective and a strategic one: Turkey should interpret the bill’s passage as an indicator of the widespread opposition to their current behavior. They should also perceive this as a warning that the U.S., with the possible exception of President Trump, will no longer tolerate its malicious acts. It is high time Turkey begins to face consequences for its actions.