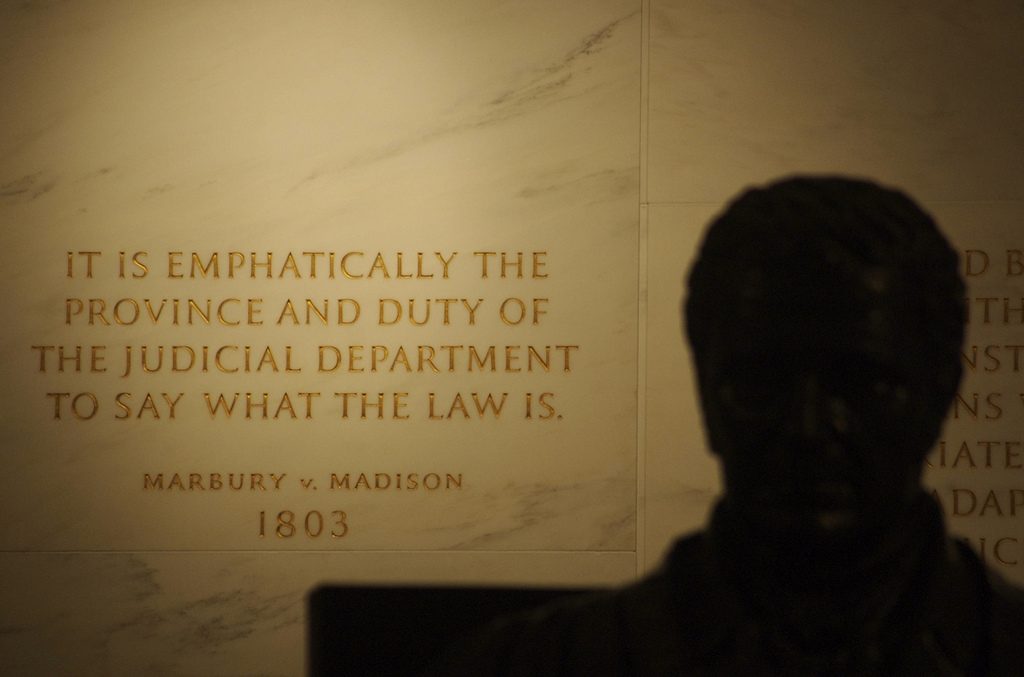 The Anti-democratic Nature of Judicial Review: How Powerful is the Court?

A discussion of Marbury v. Madison (1803) and constitutional supremacy.

The year is 1800 and Republican representatives have earned a majority of spots in the political branches, but the Federalists still hold positions in the judiciary branch. In response, the newly instated President Thomas Jefferson wages a legal war on the judiciary. Unpleased with President John Adams’ judicial appointments, Jefferson and the acting Republican Congress “[embarked] on a purge of the Federalist Judiciary with a series of arbitrary impeachments” and pursued the eradication of all federal circuit judges by “repealing the 1801 statue that created the federal circuit bench”, explained Louise Weinberg in her Virginia Law Review article, “Our Marbury”.

One of Adam’s judicial appointees, William Marbury, was not recognized by Jefferson because his commission was never delivered by the Secretary of State. Marbury then petitioned to the Supreme Court, led by Chief Justice John Marshall at the time, to compel James Madison to finally deliver the commissions and allow Marbury to take his role as a federal judge. But this case presented Justice Marshall with plight. If Marshall were to order James Madison to deliver the commission, the order would surely go ignored, and the Court would appear to the public as incapable, and powerless. As Alexander Hamilton writes in “Federalist No. 78”, the Court may offer “neither force nor will, but merely judgement”. Surely the court cannot begin its official role of constitutional upholders as a “laughingstock”. And, as Weinberg remarks, “if Marshall declines to order Madison to deliver, it will look as though the Supreme Court is backing down.”

In order to avoid humiliation while also preserving the dignity and legitimacy of the Court, Chief Justice Marshall ultimately decided that the Court held no constitutional jurisdiction over the presented case because Marbury attempted to begin his case in the Supreme Court. Marbury relied on a writ of mandamus – a Congressional grant of jurisdiction to the Court justified by Section 13 of the Judiciary Act of 1789 – in order to present his case to the Court for immediate action. However, Article III of the US Constitution provides that “[in] all Cases affecting Ambassadors, other public Ministers and Consuls, and those in which a State shall be a Party, the Supreme Court shall have original Jurisdiction”.  While offering that “to withhold [Marbury’s] commission […] is an act […] violative of a vested legal right”, Marshall also provided with his opinion one of the most fundamental, essential, and criticized ideas involving the Court’s power in government. Marbury v. Madison, 5 U.S. 137 (1803).

Marshall stated in his opinion that “the Government of the United States has been emphatically termed a government of laws, and not of men”. Here, he uncovered a large fault in American democracy: the United States, while supposedly holding the Constitution in the highest authority, ultimately conforms action to democratic decisions that do not always uphold constitutional values. Elected representatives and senators represent the general majoritarian will of the electorate through passing democratic legislation. But to Marshall, there lie a problem in men circumventing Constitutional values by creating legislation on whim just because it may be democratic in nature. The Constitution is to be held as the ultimate legal authority, and therefore, should come before man’s will. Marshall is criticized for his verbal claim that democratic processes do not matter much when it comes to Constitutional law. According to Weinberg, Marshall’s “constitutional interpretation […] stripped Congress of its power to add to the original jurisdiction of the Supreme Court” – by stripping Congress of its power, the people are then stripped of their power. As a result, the most non-democratic and independent body of government holds the power to completely sidestep traditional democratic mechanisms – a democratic majority is ignored. Although Congress states in § 13 of the Judiciary Act of 1789 that the Court may “issue writs of mandamus, in cases warranted by the principles and usages of law, to any courts appointed, or persons holding office, under the authority of the United States”, this democratic legislature is in violation of the terms described in Article III that outline the Court’s original jurisdiction.

As Marshall’s opinion on the matter was triggered by his belief that § 13 of the Act of 1789 intended to expand original jurisdiction – which is something explicitly defined in the Constitution – he famously declares that “it is emphatically the duty of the Judicial Department to say what the law is”. In this, he historically establishes the principle of judicial review. He further offers that “if the courts are to regard the Constitution, and the Constitution is superior to any ordinary act of legislature, the Constitution […] must govern the case to which they both apply”. This statement made by Chief Justice Marshall grants the Court power unmatched by the other governmental bodies. With one opinion, Marshall asserts that, as a Constitutional interpreter and applicator, the ruling of justices, that is, the interpretation and explanation of law itself, holds constitutional supremacy. Because the Constitution is highest law in the land and a justice’s duty is to interpret and apply the Constitution, then the various justice’s words are the law itself. If Marshall did not articulate this concept, then the presumption would be that “any clause in the Constitution is intended to be without effect”, for constitutionality would not be something constantly recognized and upheld by the other branches.

Of course though, we must not forget that the the power of the courts may be diminished if other bodies will it to be. This theory of constitutional supremacy is most legitimate when the Constitution is actual upheld as the supreme law of the land. If the various branches, those serving in these branches, or the general citizenry fail to actualize the language of the Constitution and all of its many outlined values, then, similar to the Constitution, my previous words are ought to be ignored. As previously stated, the court has no power to enforce their decisions.

In Worcester v. Georgia, 31 U.S. 515 (1832), the majority held that “treaties and laws of the United States contemplate the Indian territory as completely separated from that of the states”, and therefore, Georgia could not apply its state law to remove “Indians” from its land. One would assume that because the Court issued its decision on the issue presented, everyone else follows. But this did not happen. While President Andrew Jackson is infamously remembered for responding to Court, “Marshall has made his ruling, now let him enforce it”, this never actually happened. Jon Meacham notes in his book, “American Lion: Andrew Jackson in the White House”, Justice Story stated, “The Court has done its duty. Let the nation now do theirs.” But, the state of Georgia soon announced that they would hang any person who attempted to implement the ruling. In response to the actions taken by Georgia, President Jackson actually stated, “The decision of the Supreme Court has fell still born […] and they find that it cannot coerce Georgia to yield to its mandate.”

When a situation arises in which the word of the Court is not followed, we are then forced to task ourselves with deciding which of two values may be more important: democracy, bringing government into the hands of the people, and allowing for the ultimate expression of general will, or constitutional supremacy, the stress placed on the value and power of the Constitution’s written words. While it is for certain Chief Justice Marshall would not say our democratic processes are erroneous, he actively created a practice that would make it so in various circumstances. Now exists a Court composed of various justices, none of who were appointed through direct democratic means. They have no term limits and are not necessarily responsive to change in political attitudes. They hold power equal to, if not greater than, the supreme Constitution, while dictating and overruling democratically passed legislation that the people of the nation approve of. Legislation may be positive, it may be helpful, it may be needed, but it also may be unconstitutional. The Marshall court established a practice that, when used, questions the legitimacy of Congress’s legislative authority ultimately allowed by democratic institutional systems.

We are faced with a large issue because of judicial review: the courts are placed high on a pedestal of power. If the word of the Court – as it assesses and realizes the Constitution and all of its language – is to be the final rule of the land, then why should the people participate in the political process? If their will must be validated by the Court and the Constitution, then their participation in democratic processes may sometimes be considered nonsensical.

But to reiterate some of points made in the Federalist Papers, the Court’s role is necessary because legislation may be passed by haughty and improvident men that continuously neglect the voices of grander weight. Hamilton expresses that the the seeming unassailability of the judges’ words is an “essential safeguard against the effects of occasional ill humors in the society. These sometimes extend no farther than to the injury of the private rights of particular classes of citizens, by unjust and partial laws”.

So the Court’s power in judicial review, while contradictory to the goals of American representational democracy, also exists to protect the citizenry from representatives that buy into the issue of independence in the democratic paradox. When representatives showcase political ignorance, the Court may be there to correct the behavior. Nevertheless, it seems questionable that the Court’s power was aimed at repressing the possibility of democratic tyranny, as described by Madison. Further, Hamilton notes that the court is an “excellent barrier to the encroachments and oppressions of the representative body.” But this statement comes with the assumption that representatives will not do their duty in representation. Both Hamilton and Madison assume that the government may not do their jobs, and created a lane for the Supreme Court to circumvent possible divergence from representational duties – from failures to represent the people and thus violating  democratic principles kept in order to protect minority rights, to misrepresenting the aims of the Constitution – the Court was given the responsibility of keeping law and order. If the goal of the Court is to prevail against assumed Constitutional violations, then the Court, by its mere existence, is an anti-democratic remedy to wrongful acts.

Though it may be valid for the Founders to create as a check on legislative power, it does not dismiss the fact that judicial review by the Court intervenes on the democratic process.  Whatever the case may be, as Edward Corwin describes in his Michigan Law Review article, “Marbury v. Madison and the Doctrine of Judicial Review”, “the courts are interpreting the law; and if those subject to the ordinary law are bound by the judicial interpretation of it, then those subject to the Constitution are bound by the judicial interpretation of it”, and thus, opinions issued by a non-elected, independent body, hold a higher power than those opinions voiced by a general will or majority. The justices’ words are then, by their relation to the Constitution, the supreme law of the land.